My recent comments on the new Black Sabbath (and the replies to it) caused me to wonder about what makes us like certain things and not others. And not just in the sense of why do I like Wolfmother but not Justin Bieber (that one’s pretty obvious). Or even why such a Rush fan as me doesn’t like the “Hold Your Fire” record but really enjoys “Vapor Trails” (whereas I expect for some Rush fans it’s the reverse), but what’s fascinating to me is how at this point I can’t listen to the Who’s “Won’t Get Fooled Again” anymore (what some call the “Stairway to Heaven effect”) but can still listen to “I Can’t Explain”, even though I’ve likely heard the latter more times. Compound this with the fact the “Won’t Get Fooled” has a variety of sections and harmony and dynamic changes while “Can’t Explain” is mostly three chords pounded into the dirt. One would think if I was going to get sick of a song it would be the simpler one.

(And why do I have so many Bill Frisell albums but only two from Larry Coryell? The first response would be that Frisell is so much better, but are there people who would dispute that?)

Maybe it’s due to where and when I first encountered the song/artist/genre. Like the idea that if you eat a certain food and get violently ill you will find that food less appetizing in the future. But I doubt that’s it. I think we’ve all had the experience of being on a date and this person who we’re really into decides to play us their favourite song and we think it’s crap (of course, you don’t tell the other person that, you smile and tell them how much you like it). We should really appreciate this music if it’s linked with this wonderful event, but it doesn’t always turn out that way.

And to being the idea of food back (as I often like to do): nobody ever discusses these things around that subject, do they? I’ve never heard anyone asking “Why do I hate coffee but like coffee flavoured ice-cream?” or “How come you’ll eat raisins on their own but not in muffins?” Do people have these conversations (just when I’m not around)?

Or maybe it’s like that old saying (I’ve heard credited to Frank Zappa): “Talking about music is like dancing about architecture.” 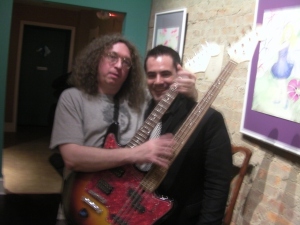