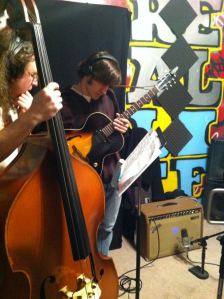 So I’m performing w/ Piltdown Man this evening, and I’m spending a portion of the day warming up (just like if you were a runner you wouldn’t just jump out of bed and onto the starting line. Well, maybe YOU might). This consists of doing some silly sounding voice exercises (which I do while cooking and doing dishes. Of course I have to stop when the cooking is done as it’s difficult to eat and sing simultaneously), and some instrumental practice and maybe singin’ and playing some songs. I usually do stuff that I won’t be doing at the performance, so that when I perform it’s fresh (to me). I always hated when bands I was in would rehearse the set on the day of the show. It’s harder for me to get into playing a song for an audience when I’ve already played that same song 3 times that day. Sometimes it was unavoidable, so I dealt with it, but it’s not preferable.

I also will even try to play different instruments that I’m playing at the show. E.g. prior to a Coincidence Machine show I will probably spend most of the day on the string bass. I figure I’m playing a manual (w/ the hands) string instrument, so even though it’s not exactly the same as what I’m dong at the show it’s still similar motions and muscles, and I’m more excited about playing something else at the show. Some of you may disagree with this, and you’re welcome to leave your comments at the bottom of this post so I can ignore them later.

W/ Piltdown Man, since I predominantly play string bass, and it’s the most difficult instrument I play, this doesn’t always work, so I will probably do a little work on that instrument, but I’ll try to make it something that has little or nothing to do w/ what I’ll be playing later (which can be difficult considering how diverse our sets typically are, so I expect I’ll just read through some classical music). I also try to knock off at least an hour before I leave for the gig, and maybe just do something mindless like watch TV so that my mind is clear(er) when it comes time to hit.

That’s how I do it. How do you prepare for a performance?