Origin of the Beast 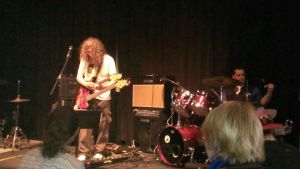 At our last two performances a number of people asked me about how it is that I’ve come to play this double-kneck guitar bass contraption ( I call it “the Beast”). I figured I’d blog on it so maybe I won’t have to tell this story so much in the future (though I’m still happy to if someone asks).

When me and Matt decided to put together a group to play more rock & roll material, we put out ads looking for a third member. With me being a bassist and guitarist, we thought maybe an instrument that could also fill multiple roles, like an organ or cello, but we tried to word the ad so that most any musician could respond and be considered. We posted it on a few sites that catered to musicians searching for other musicians, and waited.

We received a response of exactly no one. Not even any tire-kickers just curious about what this project was about. Though this was disappointing, I put forth the idea that there are other groups that are duos, most notably the White Stripes, the Black Keys, Clatter, and Om. And my ability to play either bass or guitar should add more variety than those acts have. I had a small loop pedal that I’d been using in other contexts, and figured I could also use that in this group to also help fill out the sound.

We’d been rehearsing for about a year when one day  was talking w/ Josh Berman about what we were doing, explaining that “I play bass and guitar thru a loop pedal, layering loops to play on top of” and he responded: “Oh, like El Ten Eleven”. My reaction was: “Who’s that?” They happened to be playing in NYC that month (or the next month, I can’t remember exactly) so I went to see them and Kristian Dunn was playing a double kneck guitar and bass, layering loops with both instruments. I immediately thought “That’s what I need for Coincidence Machine”.

So I scoured the internet looking for one. They’re not readily available (how many people are in situations where they could use one of these?) but on Ebay I did find a chinese luthier who had some, but with the bass on the wrong side. Since bass guitar is played with a more extended right arm, and plectrum guitar with a bent elbow (at least that’s the way I do it) it doesn’t make sense to have the bass on top. I wrote to him and asked if he could reverse them. He said fine. So then I asked if he could make it w/ separate outputs and humbuckers in the guitar. He again agreed, though I was starting to feel like I was pushing my luck.

When I got it, the jacks and wiring were a mess, but it made more sense to just have the Guitar Museum rewire it and replace the jacks rather than ship it back to china, and I’ve had no other issues w/ it since.

Well, one other issue: learning to fully use it within the context of Coincidence Machine.