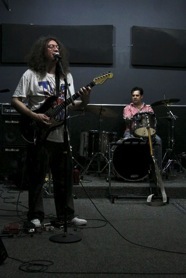 Me (Twang!) and Matt were speaking, and both of us were remarking on how for us, music was a very spiritual thing. And by this I don’t mean some kind of candles in a dark room while chanting incantations type of thing. Just that we tend not to listen to music passively, but actively. Surrendering to the music and letting it take us to another state of being ( now it’s beginning to sound like candles and incantations again). I remember Kerry Merkle (of JWB) remarking on how back in the day of records (for those of you who remember) an LP was a ritualistic experience. After bringing the record home, you had to put a slit in the shrinkwrap, remove the record, put it on the turntable and then move the stylus into position to listen to the music. And at the end of one side, you had to get up and go over to the record player and physically turn the platter over to hear the rest of the music.

Though our culture (for the most part)doesn’t treat music w/ this kind of reverence, me and Matt were in agreement that we’d still like to make music at that level, and hopefully have it affect people in the same way. Or maybe it’s more a matter of finding the people who appreciate music in this way and getting our music to them. We’re still figuring a lot of this stuff out.

But in spite of the internal questioning, I still managed to spend yesterday and today tracking guitar and voice for two new songs: “In View” which was written years ago, but I think would be a great acoustic guitar/percussion track (like early T-Rex). “I Am” I just wrote last week. I thought it sounded way to Adrian Belew (who I overlistened to during the hurricane aftermath) but after recording it I said to myself : “That doesn’t sound like Belew at all.”

No matter how hard I try, I still sound like me.